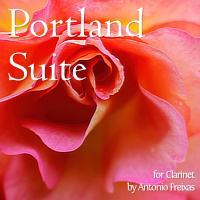 I started my musical composition "career" with a symphonic work, then started writing quintets, quartets, trios, duets, and, finally, solo works. Until now, the solos have all been written for the piano, an instrument that can support multiple voices and complex harmonies.

I became intrigued with the idea of writing a true solo work for a wind instrument. Most such "solos" actually come with a piano accompaniment. Writing an interesting piece of music for an instrument that can only play one note at a time is a true challenge. Bach showed me how it might be done.

A few years ago, I bough a melodica, a wind instrument that looks like a plastic child's toy. It has a piano-like keyboard (mine has 37 keys), which makes it easy for a pianist such as myself to learn. There is very little music written for the melodica. It isn't necessary because much existing music can be performed on it. For example, many violin, flute, clarinet and saxophone pieces fall entirely within the 37-key range. I also discovered that if I played just the top voice of some of Bach's piano pieces, the result was a strong solo piece.

Inspired by some of the pieces in Bach's French Suites and English Suites, I wrote the three short pieces that I call the Portland Suite. I have performed the pieces on a melodica, but it I conceived it for the clarinet.

As you listen to it, you may hear some echoes of Bach's style, but I feel the pieces are closer to the Romantic/Impressionist styles than to Baroque.

The music on my site is almost entirely performed by a computer. These three movements are intended to be played freely, so it took me several days to get the interpretation I wanted. When listening to performances of one of Bach's flute solos, I noticed that it was also interpreted freely. The reason for that is that Bach often ignored the performer's need to breathe, so each performer has to decide how to shape to piece to accommodate their breathing.