for flute and piano 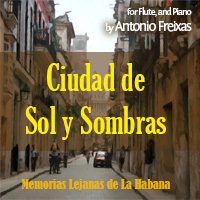 After writing In the Nursery, a work based on a selection of nursery tunes, I started to think about doing something similar with Cuban music, the music of the country in which I was born. By coincidence, I ran into my friend, Anya, the artistic director of Portland Chamber Music, who was interested in including me in a program of music by immigrants. Fate seemed to be saying that it was time to follow through on my idea.

While I was born in Havana, Cuba, I left when I was seven and have never returned. I have only vague memories of Cuba. My impressions (particularly my musical impressions) come mostly from the piece of Cuba that came with me: my parents.

In one sense, every work I write is “Cuban” music. But what people generally think of as Cuban music is a complex combination of African and Spanish rhythms and styles spanning centuries of development. This kind of Cuban music remains unfamiliar to me. Ciudad de Sol y Sombras is not Cuban music in that sense. Rather, it is my impressions of Cuban (and Latin and Spanish) music, mostly coming from hearing the music my parents liked to play.

The title refers to Havana, a city that swelters under a hot sun and was built with tall buildings and narrow streets to maximize shade. The contrast of sun and shadows is symbolized in the music by shifts from major to harmonic minor and back—a feature common to the Latin music I am familiar with.

Taking this further, the entire piece can be thought of as a single day in Havana. It begins with an impressionist-sounding passage that could represent early morning by Havana Bay. The song proceeds with the sounds of the city throughout the day, switching from major to minor as we pass from sun to shadow. The music finally stays in the minor key and gets quieter as evening descends. As the light dies away, we are once again back by the waters of the bay.

The piece is written for piano and flute. The piano provides the rhythmic base, taking on the parts of the various percussion instruments that might appear in a Cuban band. The flute part is written in typical Cuban flute style: high, fast and improvisational.

As I said, the piece begins in an impressionistic style. But this impressionist sound has the flute playing using a son clave rhythm, a very common rhythm normally played on claves (wooden sticks).

The music then switches to a tresillo Habanera rhythm. The name gives away its connection to Havana. It is the Cuban rhythm that I am most familiar with. The melody came from my subconscious memory of the many Spanish tunes my parents played.

After an impressionistic interlude that combines the clave and Habanera rhythms, I switch to a pregón of a pregón. A pregón is a street-sellers call. Many composers have captured pregónes and turned them into songs. The most famous is El Manisero (“The Peanut Vendor”). Since this is copyrighted music, I didn’t want to directly include it in my  work, so I created a version that may call it to mind while never directly quoting it.

Following a dark passage (shade), the music lightens (sun). The chord progression changes to I–IV–V–IV, close to that used by many guajiras (Cuban folk music), including the famous Guantanamera. The rhythm is my take of son montuno. As quickly as the music turned bright, it darkens again, with a new rhythmic pattern, one I created based on hearing Cuban music.

I shift to a horizontal hemiola rhythm, familiar to most Americans through Leonard Bernstein’s West Side Story tune, America. My Cuban roots include music from Latin American and Spain, so the hemiola leads to a Spanish-sounding theme. After a few measures, the piano is playing a chorus that appears in some of the tunes made popular in this country by the movie and recordings of the Buena Vista Social Club. The chord progression is now i–VII–VI–V, which is also the main chord progression of Andalusian music. The piano takes over for a bit with some very Spanish sounds.

A short transition leads to a variation of a lullaby by a composer who is not well known: my mother. Her lullaby is called La Mariposa (“The Butterfly”) and its melancholic sound is deeply impressed into my earliest memories.

The pieces ends, as do many of my works, with a return to the beginning.

This work is dedicated to my mother, Margarita Marta Martínez y Martínez.