Celebration of a Life

for flute, cello, and piano 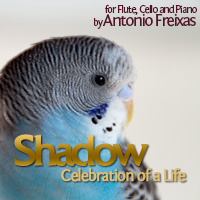 On July 14, 2016, I began a Facebook post with this: “My dear, sweet, little baby girl, my parakeet, Shadow, my friend and companion for over six years left this world today.” As a composer, it was natural for me to think about writing a piece for Shadow. Rather than try to capture my grief, I wanted to create a musical memory of Shadow at her best. I decided to tell her story from when she first entered the world to a time roughly six months to a year after she became part of my life.

Shadow loved my piano playing. She would fly to my shoulder when I played, then work her way down my arm (while I was still playing!) and onto the keyboard. She seemed to like rhythmic music with heavy chords the best and I would improvise this kind of music for her. The work, “Shadow”, includes a lot of rhythmic sections and heavy chords. Shadow would approve.

When I improvised for Shadow, I would sometimes begin by playing a very simple pattern with alternating fingers and hands. Let’s call this a “clockwork” pattern. I added this pattern to the composition. You will hear the clockwork used near the start of the piece, in the middle and at the very end.

In the piece, Shadow is represented by the flute. She has a very specific theme that appears throughout the piece, but only fully emerges near the end. I don’t think you’ll miss it. After getting familiar with her theme, listen again and see if you can find all the variations used.

Here is the story:

This piece is dedicated to everyone who has lost a beloved pet.